Robert H. Kelly, Major, Retired US Army, 81 of Elizabethtown, died Monday, June 21, 2021 at Baptist Health Hardin. He was born in Tanneytown, MD, but adopted Kentucky as home in 1974. He has been a wonderful husband, father, grandfather, great grandfather, friend, neighbor and mentor to countless people and will be dearly missed. He was a veteran of the Vietnam war, who served from 1958-1978. He served with the 503rd Military Police in Germany, and has attended many reunions every two years since 1959. After retiring from the Army, he had a 20-year career with New York Life Insurance Company. He was preceded in death by his parents, Raymond and Ella Kelly; his brothers, Walter, Albert and Earl and sisters, Beulah, Mary and Martha. He is survived by his wife of 60 years, Margaret "Peggy" Kelly; their four children, Chris Hughes, Danny (Lisa) Kelly, Shannon (Roger) Hall, and David (Hollie) Kelly. They have 10 grandchildren, Josh, Michael, David, Katie, Daniele, Ryan, Sean, Casey, Kelly and Megan and 15 great grandchildren. The funeral will be Friday at 3 p.m. at Valley Creek Baptist Church with Rev. Scott Kerr officiating. Burial will follow in Valley Creek Cemetery. Visitation will be from 10:30 to 3 p.m. Friday at Valley Creek Baptist Church. Condolences may be expressed online at www.brownfuneral.com. 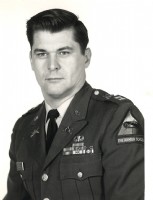