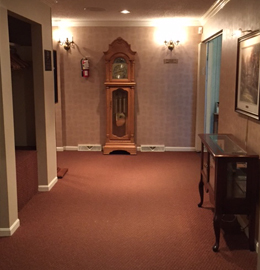 Brown Funeral Home is locally owned and operated. The funeral home was founded in September of 1972 by Robert M. and Mary C. Brown. Our location at 306 College Street in Elizabethtown, Kentucky is the original location. We have made many changes on the inside and outside, but the tradition stays the same.

After 43 years, Bob and Cathy Brown stepped down as the owners and the second generation of Brown's, Tommy Brown and Lora Brown Dixon took over. They continue with the same foundation that the funeral home was founded on.

Robert M. Brown and Mary C. Brown, the founders of Brown Funeral Home continue their involvement in the funeral home on an as needed basis. Bob continues to work most funerals even in his retirement. It is in his blood and he always has and always will have the compassion for the business.

Lora Brown Dixon began working at the funeral home in 1996 and took over ownership with her brother, Tommy in 2015. She is married to Tim Dixon and they have a daughter, Morgan, and a granddaughter, Lainey.

Morgan Dixon Eckis now the third generation of Brown's to work at the funeral home. She began working in 2017. She is married to Josh Eck and they have a daughter, Lainey.

Jeff Canary was licensed in 1990 as a funeral director and embalmer and started working for Brown Funeral Home in 1994. He and his wife Paula have two children and three grandchildren.

James M. Vantrease has been employed with the funeral home since 2009. He and his wife Anita reside in Bowling Green with their five children who were all adopted from China. He is a licensed funeral director and embalmer.

Wesley Waddle is a licensed funeral director and embalmer, having started a second career in funeral service after retiring as a public school administrator. A native of Hart County, he and his wife Angie have three children, Abigail, Rebekah and Harrison.

Erdie Carter, Sr. is our part-time employee. He is married to Donna and they have three children and five grandchildren.

Faith Arthur is a licensed Funeral Director and Embalmer. She is a graduate of Mid America College of Funeral Service and started her apprenticeship with us in October, 2017. She comes to us from Virginia.

Gary Cardin began work with the funeral home as a part time employee in 2018. He and his wife Becky have three children, seven grandchildren, and one great grandchild.

Megan Kolley is enrolled in Mid America College of Funeral Service and plans to begin her apprenticeship with us in March 2020.

Our staff is dedicated and committed to meeting the needs of our community. If you have any questions, contact us at (270) 765-2737.