Boyd Truman Wiseman of Staffordsville, Kentucky, passed away peacefully on November 7th, 2020 after a short battle with Covid-19. He was reunited in heaven with his wife, Anna Laura Edlin, his parents Dillard and Emerine, older brothers, James, Wallace, Henry and sisters Audie Wiseman and Emma Clem. Boyd's greatest legacy will be his four daughters, two sons, grand-children and growing bunch of great-grandchildren. He will be deeply missed by daughters, Patricia (Patty) Bornick, Janice Latz, Nancy Wiseman, Sharon Davis and sons, John and Dale Wiseman. He also leaves sisters Dovie Edlin, Virginia Edlin and brother Dennison Wiseman, many nieces, nephews, friends, neighbors, and former co-workers. Boyd Truman was born on April 8, 1933 on a farm in Irvine, Kentucky. Most of his childhood was spent in Hardin County. The eighth of nine children, he was a firecracker from the start. He was expected to help with the farm and barnyard chores from a young age, but found plenty of time to hunt, fish, tussle and run up and down the hills and hollers with his brothers. Boyd married the love of his life, Anna Laura Edlin, in July 1955 after he completed a tour of duty in the United States Army. They spent the majority of their married life in Louisville, Kentucky, where they were active members of Fairdale Christian Church. Family was always first. Boyd loved his wife and six children deeply. He developed a special relationship with each of his adult children, always there to listen and support and give advice. He relished visiting extended family and his jovial personality blossomed at family reunions. Often affectionately referred to as Uncle Trouble, he loved teasing his sisters, nieces and nephews. Never one to sit still for long, Boyd found his career passion in carpentry work. He loved to solve problems and build with wood. He was proud to work with Tim Peters Construction for many years. He enjoyed his workshop in retirement - making dozens of Boyd's turkey calls and gadgets of his own design. Boyd was happy if he could be outdoors, particularly in his beloved Kentucky. He made annual fishing trips with his brother, celebrating great hauls of bluegill and crappie. He was an extraordinary hunter, starting with small game, then later, turkey and deer. In 2007, Boyd moved from Louisville to live near his youngest daughter Sharon in Eastern Kentucky. He found great joy in sharing life with her and her family, nestled in the beautiful hills that he loved so much. He became a neighborhood institution, driving his mule on trails near Paintsville, Kentucky. He was a superb gardener and a good cook. He became a meticulous paint-by-number artist. A lifelong fan, he didn't miss a University of Kentucky basketball game, though he was disappointed if they didn't win the championship every year. Boyd Truman had a zest for life that can't be captured in mere words. His eyes always twinkled. His stories were long, loud and colorful. His smile lit up any room. He brought joy and laughter to so many in his eighty-seven years. Visitation will begin at 9 a.m. Thursday with the funeral starting at 11 a.m. at Brown Funeral Home in Elizabethtown. Expressions of sympathy may take the form of Contributions to the American Heart Association. Condolences may be expressed online at www.brownfuneral.com. 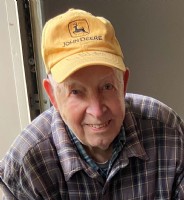