Bernard Harold "Butch" Yates, Jr., 67, of Elizabethtown, passed away Wednesday, October 2, 2019, at his residence. He was a native of Hardin County, a 1970 graduate of North Hardin High School and served in the U.S. Army. He was an HVAC engineer, wood artisan, poet, and member of St. James Catholic Church where he cantored. He was a former member of St. Brigid Catholic Church and had a heart as big as himself He was preceded in death by his parents, Bernard Harold Yates, Sr. and Josephine Florence Yates. He is survived by his wife of six years, Jessica Ruiz Yates;six children, Gina (Joe) Saltsman of Rineyville, Carrie (Jason) White of Elizabethtown, Andy (Heather) Yates of New Albany, IN, Brandon Yates of Brandenburg, Amy Melissa (Aaron) Fincher of Cecilia and Bridget (Nathan) Mayfield of Bowling Green; two brothers, Mickey Yates and Tim (Deliana) Yates; three sisters, Terri McDonald, Sharon (Chris) Marcum and Angela (Delbert) Berthold; and ten grandchildren, Lauren, Reagan, Spencer, Samuel, Aurora, Lily, Iris, Chloe, Maddox, and Reece. The funeral will be Tuesday at 11 a.m. at St. James Catholic Church. Burial will follow in the Kentucky Veterans Cemetery Central in Radcliff. Visitation will be Monday from 3 to 8 p.m. and continue after 9 a.m. Tuesday at Brown Funeral Home. There will be a Prayer Vigil Service at 7 p.m. Monday at the funeral home. Expressions of sympathy may take the form of Contributions to beatnb.org for Neuroblastoma in honor of Finn. Condolences may be expressed at www.brownfuneral.com. 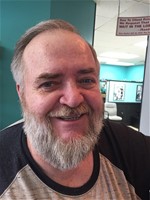