John Anthony "Jack" Adams, 83 of Elizabethtown KY, went peacefully to his heavenly home on Friday October 29, 2021. He passed away at Baptist Health Hardin surrounded by his family. He was born and raised in Alpena Michigan and joined the Army in 1959. He served as a Combat Medic in Vietnam. There are surely men whose names are on the Vietnam Memorial Wall that Jack held in his hands. He is our hero. After his retirement at the rank of SFC, he continued to serve our military as an X-ray Tech at Fort Knox Ireland Army Hospital and at the Louisville VA Medical Center. He was a graduate of the University of Louisville and a member of St. James Catholic Church. To all who knew him, he was one of the most kind, gentle, and funny men God ever placed on this earth. He was an avid golfer and loved to grow prize-winning roses, sing, dance, and play his harmonica. Above all else he loved his family and Jesus was his forever friend. He was preceded in death by his father Gus Adams; his mother Philomena (Rosati) Adams; his brother Bob Adams, and his son-in-law Rodney Lyons. Survivors include the love of his life, married 62 years, Sharon Lee (Mackley) Adams; his daughters, Laura (Stuart) Snyder, Kathie (Tony) Chase, Renee Lyons; and his son Mark (Pam) Adams. Also surviving are his grandchildren, Kyla Adams, Seth Adams, Jud Adams, Andrew Snyder; and three beautiful great grandchildren. Visitation will be at Brown Funeral Home in Elizabethtown from 3 to 6 PM on Thursday, November 4th, with a Memorial to begin at 6 PM. Condolences may be expressed at brownfuneral.com. In lieu of flowers, a donation could be made to the Alzheimers Association. Or, to honor the kind of person Jack was, you may do a random act of kindness for a stranger or someone you love. 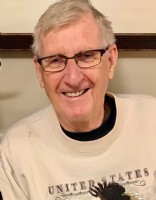