Jason Daniel Schreck, 42 of Elizabethtown, died Monday, September 27, 2021 at Baptist Health Hardin. He was a native of Hampton, VA and attended Gilead Baptist Church in Glendale. Since moving to Kentucky in 2008, he immerged himself in the community as a boy scout troop co-leader, history museum volunteer, and Civil War re-enactor. As a history buff and lover of science, he previously worked at the Virginia Air and Space Center in Hampton, served as a Counselor at the U.S. Space Rocket Center in Huntsville, AL and taught at the Louisville Science Center. He especially enjoyed visiting juvenile diabetes and childhood cancer patients as part of The Five-O-First Rebel Legion Sci-fi costuming group. While his work ethics and hobbies were very important to him, his faith in God and love of family were his first priorities. He was preceded in death by his mother, Carol W. Maulden and grandparents, Tom and Betty Schreck and Troy and Virginia Williams. He is survived by his wife, Lori Schreck of Elizabethtown; his father, Don Schreck of Hampton, VA; one brother, Tim Schreck of Hampton, VA and numerous aunts, uncles and cousins. The funeral will be Friday at 2 p.m. at Brown Funeral Home with Rev. Sam Hinkson officiating. A private graveside service to follow. Visitation will be from 10 to 2 p.m. Friday at the funeral home. In lieu of flowers, the family requests donations be made to STARFLEET Region 1 Space Camp Scholarship Fund or St. Jude's Children's Research Hospital. Condolences may be expressed online at www.brownfuneral.com. 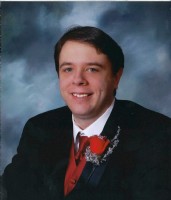