Elizabeth "Libbie" Stith Walters, 79, of Elizabethtown, passed away Monday, April 12, 2021 at University of Louisville Hospital. She was a native of Hardin County and retired from the Kentucky Attorney General's office. She loved going to Florida in the winter and loved making friends. She was preceded in death by her husband, Anthony Wayne Walters; son, Scot Walters; and parents, Herman and Mary Jane Hamilton Stith. She is survived by two sons, Todd (Ann) Walters of Bowling Green and Matthew (Jennifer) Walters of Frankfort; daughter-in-law, Marnie Walters of Frankfort; two brothers, Jay (Janet) Stith of Irvington and Hermie (Sharon) Stith of Smith's Grove; and five grandchildren who were the center of her universe, Darrell, Nicole, Margi, Hagen, and Beau. The funeral is at 2 p.m. Friday, April 16, 2021 at Brown Funeral Home in Elizabethtown with Deacon Bill Clark officiating. Burial will follow in Red Hill Cemetery in Larue County. Visitation will begin at 12 p.m. Friday at the funeral home. Expressions of sympathy may take the form of donations to the Scot A. Walters Memorial Fund at the Josephine Sculpture Park. Condolences may be expressed online at www.brownfuneral.com. 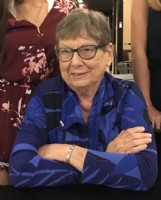