Roland L. Knox, 83 of Elizabethtown, passed away at 3:37 a.m. Sunday, April 11, 2021at Norton's Downtown Hospital in Louisville. He was a native of Clark County, OH but claimed Kentucky as his home. Son of Ace and Opal Knox, he was the oldest child of six and was a loving husband, father and friend. He was a retired Master Sargent from 20 years of Army Service, had three tours in Germany, two in Korea and one year in Vietnam. He was a retired Fire Fighter from Fort Knox, spending another 20 years protecting our military proudly. He was a member of First Christian Church in Elizabethtown where he faithfully taught Sunday School for the Upper Room class for 20 years. In his spare time he was a regular member of the Huddle House family where he was affectionately known as Grandpa. He liked to watch westerns on TV and was a kind and generous man who never met a stranger. He was preceded in death by his parents, Ace and Opal Anderson Knox and two sisters, Patty Freeman and Kathleen Wegner and a brother, Merl Knox. He is survived by Wanda Knox, his wife of 60 years; two daughters, Pam Knox Hardin (Greg) of Columbia, KY and Kim Parks (Mike) of Elizabethtown; four grandchildren, Caitlynn Meade (Jonathan) of Radcliff, Gillian Isham of Elizabethtown, Knox Isham of Chicago, IL and Maci Parks of Elizabethtown; one great grandchild, Evelynn Meade of Radcliff and two brothers, Gary Knox and Earnest Knox both of Ohio. The funeral will be Wednesday at 1 p.m. at Brown Funeral Home with Michael Parks and Johnathan Meade officiating. Burial will follow in Glendale Christian Cemetery. Visitation will begin at 11 a.m. Wednesday at Brown Funeral Home. In lieu of flowers, expression may take form to Glendale Cemetery Fund. Condolences may be expressed online at www.brownfuneral.com. 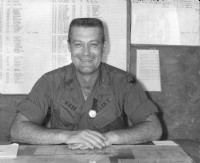