On Wednesday, January 15, 2020, Pat Donnelly, loving husband and father of two children passed away at the age of 61. John Patrick Donnelly was born on July 9, 1958 in Elizabethtown, Kentucky to John Vincent and Geraldine (nee Payne) Donnelly. On September 17, 1994, he married Susan Marlene Etherton in Lebanon Junction. They raised two children, Derek Paul Shawley and Loren Adelia Shawley. Pat, along with his Dad, Vince, purchased and then operated Turnpike Liquors in Shepherdsville, Kentucky for 36 years. Pat had a passion for hunting and fishing throughout his life. He and Marlene enjoyed many years of horseback riding. Pat was known in high school sports for his ferocious hitting in football, his 100% effort and relentless hustle in basketball. He lived life with this same vigor and intensity, always smiling and engaging. His greatest accomplishment was his two granddaughters and being called Papaw. Pat was preceded in death by his parents, Vince and Gerry (nee Payne) Donnelly. He is survived by his wife, Marlene (nee Etherton); his two children, Derek (Amanda) Shawley and Loren Shawley; his two grandchildren, Harper Jewel Shawley and Bailey Grace Graham; his father-in-law, Emmett Lee Etherton; his brother, Robert Vincent (Marie) Donnelly; his sister, Mary Denise Bailey; his brothers-in-law, Cortney Rueben Etherton and Louis Victor Bub Etherton; and several aunts, uncles, cousins, nieces and nephews. Per Pats wishes, there will be no services at this time. A Celebration of Life will be scheduled for family and friends at a later date. Brown Funeral Home is in charge of arrangements. 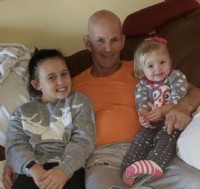