Ronald James Myers, 79 of Elizabethtown, went to be with his Lord on Monday, February 18, 2019 at Hardin Memorial Hospital surrounded by his family. Ron graduated from Elizabethtown High School in 1957: He received a Bachelor's Degree from Western Kentucky University and continued his education ending with a Master's Degree and Rank 1. He started his teaching career at St. Charles Middle School in Lebanon, KY for one semester. He then taught at Ft. Knox Middle School for seven years. In 1970, he was coaxed to start a career of teaching and coaching at Elizabethtown High School, his alma mater. Ron played baseball all his life. He played in high school and went on to become captain of the Western Kentucky Hilltopper Baseball team. After being hired by Elizabethtown Independent Schools, Ron became a teacher, baseball coach and assistant football coach. He loved teaching senior English, especially Shakespear. He taught and coached at EIS for thirty one years, retiring in 1999 and went back to Ft. Knox Middle School for another five years of teaching. He was a 60+ year member of Memorial United Methodist Church. He loved his church and held many responsibilities there through the years. He loved God, his family, teaching and coaching. He renewed his faith on a trip to Israel by being baptized in the Jordan River. He took after his mother in being full of life, enjoying every minute of it. He enjoyed traveling, golfing, fishing, and playing scrabble. He was preceded in death by his parents, James and Dorothy Milby Myers, and a sister, Barbara Myers Meachum. Survivors include his wife of 57 years, Brenda; a son Jeff Myers; two daughters, Shawn Myers and Devon Myers Carlson (Erik); granddaughter, Drewanne Carlson and three nieces, Stacy, Janna and Courtney and several great nieces and nephews. The funeral will be Saturday at 11 a.m. at Memorial United Methodist Church with Rev. Ernie Bagley, Rev. Andy Vance, Rev. Don Sexton and Rev. Neil Janes officiating. Burial will follow in Hardin Memorial Park. Visitation will be from 4 to 8 p.m. Friday at Brown Funeral Home and continue after 9:30 a.m. Saturday at Memorial United Methodist Church. Expressions of sympathy may take the form of donations to Lewy Body Dementia Association, 912 Killian Hill Rd SW, Lilburn, GA 30047. Condolences may be expressed online at www.brownfuneral.com. 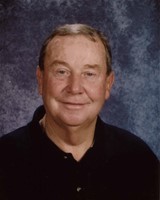