Gladys Rushing, 92 of Elizabethtown, died Sunday, October 10, 2021 at Sunrise Manor Nursing Home. She was born in Magnolia in Hart County on April 4, 1929 and then moved to Mt. Sherman, KY at the age of 10 where her family bought a farm. Later when Gladys became a military wife, she followed her husband to Germany and returned back to Elizabethtown where they made their home and lived until her death. She was Baptist by faith and accepted salvation at a young age. She was a member of Mt. Moriah Baptist Church in Mt. Sherman but in later years, she and Randell attended the Main Post Chapel on Ft. Knox. She was preceded in death by her husband, Randell Rushing; her parents and Richard and Rosie Jones (Slayton). Survivors include one son, Wayne (Bonnie) Rushing; two daughters, Rhonda (Tony) Meredith and Janet Rushing; five grandchildren, Becky (Richard) Smallwood, Bonnie (Jody) Love, Matthew (Sarah) Rushing, Jonathan (Jennifer) Rushing and Samuel (Tasha Wood) Rushing; ten great grandchildren and six great great grandchildren. Visitation will be Thursday from 4 to 8 p.m. and continue after 9 a.m. Friday at Brown Funeral Home. The funeral will be 11 a.m. Friday at Brown Funeral Home with Rev. Shannon McCubbins officiating. Burial will be in the Kentucky Veterans Cemetery Central in Radcliff on Monday November 8, 2021 at 12:30 pm. Condolences may be expressed online at www.brownfuneral.com. 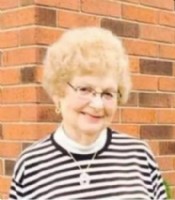