SSG (Ret) Warnie Ray Nelson, 81, of Elizabethtown, passed away on Sunday, May 16, 2021 at Norton Healthcare Pavilion in Louisville. He was born in a coal mining camp in Logan, West Virginia and is the last survivor of 13 children of Cush and Dollie Nelson. He served several tours in Vietnam and a year in Iraq. He earned several Overseas Campaign awards and National Defense Service metals. He had 22 years of service and he was also an avid fisherman, paratrooper, and suba diving expert. Warnie is survived by his wife, Johanna Nelson; son and daughter-in-law, Mark and Sheree Nelson; a daughter, Laura Braghini; and five grandchildren, Logan, Danielle, Alexander, Samantha and Ian Nelson all of Elizabethtown. The funeral is Wednesday, May 19 at 12:30 p.m. at St. James Catholic Church. Burial will follow in Kentucky Veterans Cemetery Central in Radcliff. Visitation will be 10 a.m. to noon at Brown Funeral Home in Elizabethtown. Condolences may be expressed online at www.brownfuneral.com. 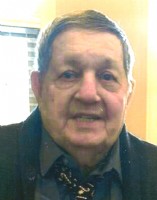