Albert Alfred "Pappy" Stover, 77, of Elizabethtown, died peacefully at 1:34 p.m. at his home on Wednesday, February 17, 2021. He was a native of Levelland, Texas. He was a 23 year U.S. Army veteran who served in combat during the Vietnam War. After his retirement from the Army, he worked as an appliance repair technician for Sears. He was a lifetime member of the Vietnam Veterans of America, and was a member of the American Legion, the Disabled American Veterans, the U.S. Army Brotherhood of Tankers, and the POW/MIA Flag Guard. He was very well known and loved in the military/veterans community and spent much time in hospitals visiting veterans. He was a military hero and was greatly beloved by his family. He was preceded in death by his parents, Robert Albert Stover and Lucille Greer Stover; and sister, Sue Drennan. He is survived by his loving wife, Evanthia Marie Stover; daughter, Cindy Sue Stover; four sons, Robert Albert Stover, James Alfred Stover, James Samuel Stover, and Albert Edward Stover; seven grandchildren. He is also survived by three sisters, Shirley Brill, Judy Manning, and Pamela Hausmann; and three brothers, Bobby Stover, Joel Stover, and Willy Stover. A memorial service will take place at a later date and time due to inclement weather and Covid-19. Condolences may be expressed online at www.brownfuneral.com. 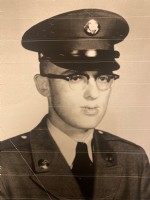