Fred Ellsworth Young, 86, of Elizabethtown, died Sunday, January 12, 2020 at his residence. He was a native of Carrie, OH and served in the U.S. Army during the Korean War. He was a former Post Commander of VFW Post #4235, the American Legion and the AmVets Post #66 in Bradford, OH and Covington, OH. He retired from Westing House and Production Paint and he loved to dance. He was preceded in death by his parents, James and Grace Young and his siblings, Helen, Ruth, Jack and Bill. He is survived by his wife of 65 years, Helen Riblet Young; two sons, Daniel R. (Twyla) Young of Elizabethtown and Randy J. Young of Colorado Springs, CO; one sister, Shirley Earick of Niceville, FL; four grandchildren, Chuck Young, Randy Young, Jennifer Boudrau and Leslie Beecham; twelve great grandchildren, Corey, Whitney, Dustin, Julian, Charlene, Raven, Iesha, Danny, Ally, Sammy, Gabe and Jacklyn and a great great grandchild, Josephine. A Memorial Service will be at 1 p.m. Saturday, January 18, at Colesburg Baptist Church with Bro. Lamar Black officiating. A Graveside Service will be at 10 a.m. Tuesday, January 21, at Kentucky Veterans Cemetery Central in Radcliff. In lieu of flowers, donations may be made to the Disabled American Veterans. Condolences may be expressed online at www.brownfuneral.com. 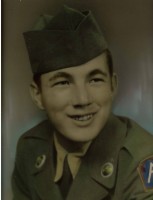